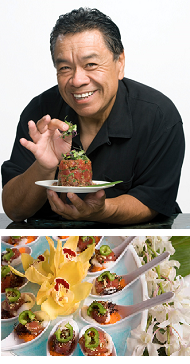 Sam Choy is a chef, restaurateur, and television personality known as a founding contributor of “Pacific rim cuisine”. Chef Sam is an alumnus of the Kapiolani Community College Culinary Arts program. One of his first jobs as a chef was at The Waldorf-Astoria Hotel in New York City. He would then return to Hawaii, where he eventually opened a chain of restaurants. Chef Sam helped develop and popularize Hawaii regional cuisine.

In 1991, Chef Sam founded the Poke Festival and Recipe Contest. In 2004, Chef Sam was awarded the James Beard Foundation Award America’s Classics Award for Sam Choy’s Kaloko in Kailua-Kona, on the Big Island of Hawaii. The award recognizes “beloved regional restaurants” that reflect the character of their communities.

Chef Sam has appeared in several Food TV programs, including Ready.. Set… Cook! and Iron Chef America. He is good friends with Emeril Lagasse, who has appeared on Sam’s TV show Sam Choy’s Kitchen on KHNL. Lagasse has also mentioned Sam by name several times in his TV shows; one of those times he was making Poke on his live TV show, and added peanut butter to the Poke – Sam’s secret ingredient. Sam has also very recently designed special Hawaiian inspired dishes for American Airlines first class passengers to and from Hawaii.

Click the Donate button below to go to our Secure PayPal page where you can choose to donate any amount with various payment options.