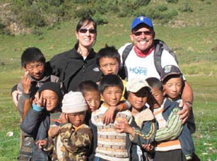 In 2004, WaterHope founders Steve and Tracy Tomkovicz were asked by a visiting Carmelite missionary to help support the building of a water well in Uganda. They responded by making a donation, but something about the missionary’s story rang in their ears.

It was water. The missionary had described the plight of his Ugandan parishioners and, to be sure, there was a lot they were going without. But Steve and Tracy couldn’t quite understand how it was possible that such a basic human need wasn’t being met. Clean, safe water, after all, isn’t a luxury; it’s necessary for life and all have a right to it. So they talked. They talked to their family, they talked to their colleagues, they talked to the members of their church and to the Ugandan missionary. They educated themselves and found out that deaths related to water scarcity and water-borne disease out-number those caused by all forms of violence, including war. Then they acted.

WaterHope began in 2004 as a single fundraising event, Wine to Water. Supported almost in total by Steve and Tracy’s successful for-profit business, Wine to Water began as a single day of golf and dinner in the Napa Valley (to see how the event has grown, click here). Year after year, the Tomkoviczs put their own money, event-planning experience, and sales acumen to work in order to raise funds and awareness of the water crisis. Being successful business owners, they knew a thing or two about connections and were able to use theirs to garner the support of other local business owners, Napa Valley Wineries and eventually PGA TOUR and PGA TOUR CHAMPIONS Professionals. They put in time, they put in money, and they never gave up hope. As the event gained momentum it was able to raise enough funds to meet the water needs of the Ugandan Carmelite mission. So, Steve and Tracy set their sights on the larger issue at hand: millions were still going without water when they didn’t have to.

In 2008, the organization established its official name, WaterHope. Federal 501©3 status was applied for and granted, and now WaterHope could set about fulfilling its purpose: to become part of the solution to the growing water crisis, to alleviate the suffering of our global brothers and sisters, and to provide people a way to show their love of others by donating their time and talents to the WaterHope cause.

To date, WaterHope has raised over $1.2 million and completed over 50 successful and sustainable water projects. We have a presence in eight countries on two continents with the goal and capability to expand further every year. Our events are supported regularly by generous donors and sponsors, and executed by a 100% volunteer staff. We are privileged to do the work we do and are ready and eager to do more.

Click the Donate button below to go to our Secure PayPal page where you can choose to donate any amount with various payment options.